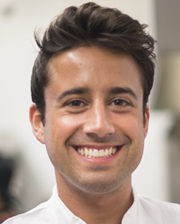 THE man behind one of the America's up and coming fish restaurant businesses has said it is time to make seafood sexy again.

Chef Andrew Gruel is the owner of Slapfish, a fast-casual restaurant, which has outlets in California and Dubai and has plans for expansion.

The former lobsterman from Maine told the US website, Nation's Restaurant News, that he is trying to bring seafood to the masses in a whole new way, adding that much of the current seafood dining experience was bland and boring.

He said: ‘Look, let’s make seafood sexy again – really do approachable, affordable seafood by buying either directly from the source or as close to that as possible.’ He is also well into the concept of serving only sustainable seafood.