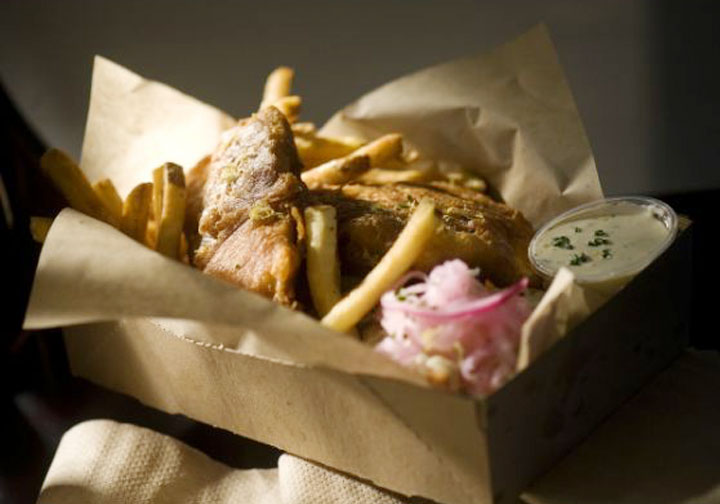 Slapfish is one of those rare restaurants to open its doors with a loyal clientele already eagerly waiting to chow down.

That's because it's the brick-and-mortar follow-up to a successful gourmet food truck that plied the streets of Orange County starting in May 2011.

As its reputation spread, the Slapfish truck attracted more and more followers to its fresh seafood offerings, though the menu is somewhat pricey for a café on wheels.

As a result, diners were ready to arrive when chef and owner Andrew Gruel used Facebook and Twitter to keep fans abreast when the permanent location opened in April.

I never made it to the now-closed Slapfish truck, though plenty of people told me to go and try the signature "Lobsticle."

So I was happy to check out the new restaurant near Mother's Market on Beach Boulevard in Huntington Beach.

This small joint has white walls, minimalist nautical trim and colorful artwork with a casual atmosphere and calls itself a "modern seafood shack."

Diners stand in line to order at the register, and the food is delivered in paper trays to the tables. Don't expect fast-food prices, though. These are quality ingredients, well-prepared, and you'd better be ready to pay for it.

It's all seafood all the time here, surf without the turf. Gruel says he specializes in serving sustainable catch – meaning their fish is not in danger of disappearing from the sea forever. Gruel founded the Seafood for the Future program, which teaches people about overfishing and how to choose sustainable fish, at the Aquarium of the Pacific in Long Beach.

He picked Huntington Beach for his restaurant's location because of its proximity to the ocean and sea-loving folks.

The menu is on a chalkboard and includes "small bites" such as fresh oysters, clam chowder, lobster quesadillas and chowder fries.

There's a tiny oyster bar with oysters raised at the Carlsbad Aquafarm.

I ordered Carlsbad Luna oysters: three small ones on the half-shell for $1.95. Very tasty, too, though my 13-year-old daughter didn't think so when I finally convinced her to try a raw oyster.

Gruel said the oysters are harvested and delivered directly to Slapfish, so they couldn't be more fresh.

Every table has Slapfish hot sauce, malt vinegar for the fish and chips, and a bottle of sea salt.

One hit at our table was the Shrimp a la Plancha, which is organic shrimp cooked in garlic with crusty bread. A bit spicy and full of flavor, it disappeared in a hurry.

The other favorite offering was the SlapFish and Chips, which was breaded and fried golden hake, an Atlantic whitefish, served with French fries. At $9.95, it's not the cheapest you'll find, but it was delicious and filling.

It wasn't on the menu, but I had to order a Lobsticle, since so many food truck fans told me about it. It came as a lobster tail with the shell trimmed to form a sort of stick or handle. Very sweet and tasty, but maybe not worth the $13.95 it costs.

The only disappointment was the daily fish plate I ordered, which came with fresh hake. It was bland and a bit overcooked.

Because the restaurant has no liquor license, you can bring your own wine and not be charged a corkage fee.

A liquor license application is pending.

Meanwhile, they also sell hard-to-find beverages such as Dang! root beer in the bottle and San Pellegrino limonata in cans.

I think when I return, I'll have the fish and chips. Although it's probably the priciest place at which I've had to stand and order at the counter, the quality of the food warrants a return visit.Slapfish makes its own tasty sauces, including buttermilk herb, tomatillo salsa, tequila lime cocktail sauce and the spicy awesome sauce, which is as advertised. Produce is hand-picked from the farmer's market – no bagged lettuce here.