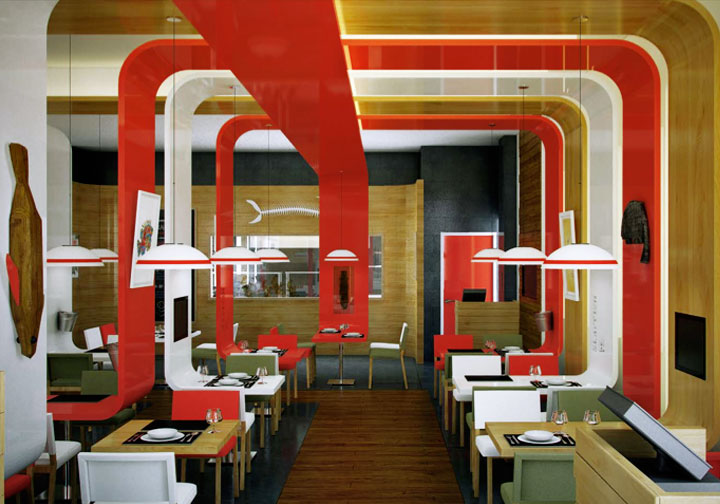 Created by chef Andrew Gruel and his business partner, Jethro Naude, the former food truck concept signed a 75-unit deal for the Middle East and is exploring deals in China and India, as well as cities within the U.S. Its first franchise unit is slated to open in Dubai through Magnolia Enterprises.

“When we started this concept in 2009, the economy was nonexistant, and trying to raise money for a restaurant was actually impossible,” Gruel says. Slapfish started as a lone food truck in Huntington Beach, California, and was born out of the founders’ mutual love of a fresh catch. Naude, an environmental economist, was in seafood distribution when the partnership began, and with ties to the local fishing community, the pair was able to source ingredients directly while keeping costs down.

Quickly, the business grew to multiple food trucks, and finally, to a brick-and-mortar location in the brand’s original stomping ground. And that spark of success is translating into big interest abroad.

“We work with a company called FranSmart, and they are kind of our sales team that puts us in touch with operators and franchisees from everywhere,” Gruel says. Slapfish sold out the entire Middle East market and has garnered interest in several other markets. “They're very interested in U.S. brands over there,” he adds.

The brand’s popularity, Gruel says, stems from a menu similar to one at a fine-dining institution at the price of a fast casual. “We try to take fun, comfortable dishes that everybody already knows and reinvent them as our own,” he says. “We try to make it sexy and fun.”

Signature items on the Slapfish menu include the Lobster Dog, a lobster bratwurst served with onions and peppers; Chowder Fries; and a Clobster Cake made with half crab and half lobster. The modern seafood shack boasts a variety of grilled and fried seasonal fish fillets, including halibut, mahi, salmon, and hake, as well as a selection of house-made sauces.

The staple menu will be tweaked, Gruel says, for international markets to suit the local palate, as will the table service. “That was the crux of our deal in Dubai,” he says. “We run a fast casual here in the U.S., and they were like, 'Look, can we do a full-service option? Can we change the design?' So we did that.” The new design features sleek red paneling and light wood tables offset by crisp white chairs.

One thing that will stay the same is the fish. “We're still sourcing all of our own seafood; we will consolidate and distribute all of our seafood to them through our trading company,” Gruel says. “That's not something we're leaving in the hands of a purveyor or a distributor, or even a franchisee—that's strictly us; we'll control that across the board.”

Logistically, he says, that commitment hasn’t been an easy one. Gruel and his team spent months working with Magnolia Enterprises to ensure the fish met the Halal standards of the Dubai community. “If you want to do farm seafood, you have to get all the feed to meet those religious standards,” he says. “So all the products do have to be registered into that country.”

He and his team are also working aggressively to anticipate seasonal fluctuation and product demand—a task impacted by the opening of four new corporate units in California and the desire to open in markets such as Chicago and Portland, he says.

Gruel is also interested in adapting the brand to nontraditional locations like airports. “It's more of a fish-and-chip concept, so it would have a consolidated menu of fried fish,” he says. “We're not just going to be out-of-the-box, frozen-and-fried—everything we'll do will still be incredibly fresh.”

At the end of the day, the quality of the product is top of mind for Gruel, who says the brand is about marine conservation.

“We think it's important for people to think about what they're eating,” he says.

“Seafood is our last source of wild food, so it's important that we take care of it and make sure we're consuming it in a responsible manner.”