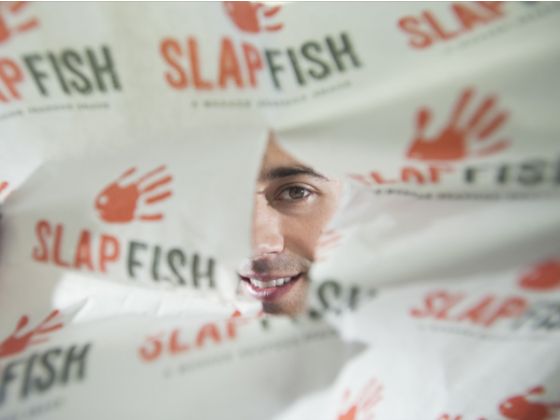 While Huntington Beach restaurant Slapfish has endured the typical trials and tribulations of a new business, its owners are now reeling in success and ready to cast a wide net into the Middle East.

On a recent afternoon, founders Andrew Gruel and Jethro Naude reminisced about the days when all they had was enough money for a few food trucks and the ambition to establish a profitable and environmentally sustainable food franchise.

The co-owners recalled the time in 2011 when a food truck broke down on the 405 Freeway during gridlock traffic and the day their cooks had to make sandwiches in the vehicle as they were driving to an event.

Despite early hiccups, the trucks eventually made the business partners enough money to allow them to give up the road and in 2012 open a restaurant in the Newland Shopping Center, off Beach Boulevard and Adams Avenue.

The restaurant has gained popularity with the help of its lobster rolls and signature Major Crunchy sandwich, but Gruel, 33, and Naude, 34, are not yet satisfied. The duo recently signed a deal to build 75 franchises in the Middle East over the next 10 years. They're also aiming to open their second company store in Orange County — in Laguna Beach — by early April.

"We're so involved with the business that it's kind of surreal," Gruel said. "It's hard to take a step outside and assess it from that perspective."

Their rapid expansion is a part of a three-pronged business approach. Gruel said the Surf City location is an example of what the owners call "Slapfish fast casual," offering a variety of salads, sandwiches and tacos.

In Laguna Beach, they plan to take the "Slapfish X" approach — a smaller shop that offers fewer food items. The plan for the Middle East is to open full-service restaurants.

Buzz around the business has grown to the extent that Gruel, who has worked as a chef in high-end restaurants along the East Coast, has been on the Food Network show "On the Rocks." During the episode that featured the Slapfish co-founder, he helped the Ringside Lounge in Huntington Beach develop a better menu.

Gruel said he will also be a resident judge on an upcoming Food Network show in July but couldn't give out further details.

Gruel and Naude link much of their success to their focus on sustainability — both in the food they use and in their day-to-day operations.

It all started in 2009 when Gruel helped develop a nonprofit organization with the Aquarium of the Pacific, in Long Beach, called Seafood for the Future, which educates chefs, restaurants and consumers about sustainable seafood.

The New Jersey native always had a fascination with marine life, he said. It was while talking with local fishermen that he found out that some types of fish were harder to catch because of overfishing. He then took it upon himself to inform others that there's an environmentally healthier and more economic way to bring fish to the masses.

"I was teaching them the right types of seafood to eat, which ones aren't harming the environment by fishing practices and which ones were good for you," Gruel said.

Naude said they only use fish that are abundant, such as salmon from Alaska and British Columbia, farm-raised barramundi, hake from the Atlantic Ocean and mahi-mahi from Baja or the Atlantic.

Using sustainable products was also a high priority for Naude, who hails from Jeffreys Bay, South Africa. He has a background in economics and ran a wholesale seafood distribution company that worked with large chain and high-end restaurants.

"I was always looking for that expert to help me approach chefs and tell them, 'Look, this is a sustainable seafood item and this is why,'" Naude said.

The two met for lunch one day after Gruel reached out to Naude to discuss Seafood for the Future. They bounced around ideas and clicked instantly. Gruel said they bonded over the idea of using products straight from the source.

Naude added that the two decided they needed to know the fishermen who caught their fish, and they should own the processing facility they use before wholesaling the product to their restaurants.

"We provide high-quality seafood at the cost and convenience of faster food," Gruel said. "So the same seafood that we're serving here is the same quality that you'd get at a fine-dining restaurant."

Their sustainability doesn't stop at the food.

"We recycle to the point where it actually generates revenue and profitability for the restaurant," Naude said. "We sell our oil. The glycerin from the oil is reused in soap that we purchase back."

Leftover vegetables from the restaurant, he added, are composted and that is material sold off. They then buy produce from the farms that use their recycled matter.

Because of these sustainability efforts, Slapfish was awarded three out of four stars by the Green Restaurant Assn., a national nonprofit organization that confers such certification. It is one of two restaurants in Orange County to have earned the three stars. Pizzeria Mozza in Newport Beach is the other.

"People think of it as a marketing thing," Gruel said. "But for us, sustainability tastes better, especially in seafood, and sustainability also means profitability."