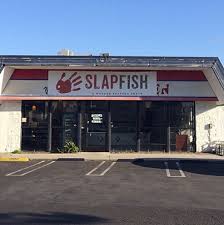 Slapfish, a Huntington Beach–based fast-casual seafood concept, announced the signing of a multiunit franchise deal to focus on Southern California. The franchisee plans to open a minimum of six stores over the next three years, with the first location planned for Newport Beach in 2014.

The new franchisee is Abdelmuti Restaurant Group led by Nedal Abdelmuti and Ahmad Abdelmuti, who have been small business owners for nearly 40 years.

“The process of choosing Slapfish was a no brainer for us. We had been fans of the concept since its food truck days, and we feel that if we were going to invest in a concept, great healthy food would have to be a focus,” says Nedal Abdelmuti. “Slapfish is about a way of life—from only selling sustainable fish to recycling every product in the restaurant—and we can get behind a concept that gives more than it takes from the environment and community.”

After the initial Newport Beach location is open this year, the franchisee is looking to open their second site in either San Clemente or Irvine, California, and subsequent real estate sites will be sought out in areas including Costa Mesa, Santa Monica, and Manhattan Beach.

“After meeting the owners of Slapfish, we realized that a great concept starts with the people and trickles down to the product that you serve,” Abdelmuti says.

Slapfish is expanding with the help of franchise development partner Fransmart, the company responsible for the explosive growth of brands like Five Guys Burgers and Fries and Qdoba Mexican Grill. While Slapfish secured a major master franchise deal in the Middle East in 2013, the Orange County deal marks the first multiunit franchise agreement for the U.S.

Slapfish is also set to open a second corporate restaurant in Laguna Beach, California, in spring or summer 2014 to continue to satisfy the appetites of the dedicated fan base in its home market.