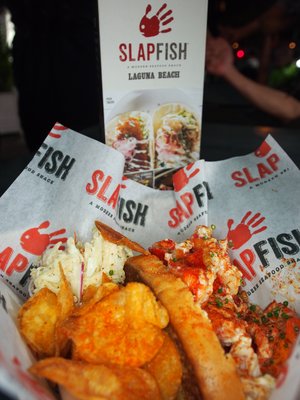 What started in 2011 as a food truck business is about to open its second stand-alone restaurant in two years.

Slapfish, which is run by Andrew Gruel and Jethro Naude, is branching out from its Huntington Beach restaurant and opening at 211 Broadway near Coast Highway in Laguna Beach at the end of April, bringing its sustainable and ecosystem-friendly seafood with it.

"We want to bump up the seafood scene and bring fun, sexy seafood to Laguna and redefine how people eat seafood," chef Andrew Gruel said. "We want to make it hip and fresh again."

Gruel said one of the most important aspects of Slapfish is making sure it provides customers with high-quality seafood at an affordable price and, at the same time, educate people on the right kind of seafood to consume.

"The culture of our brand is really about redefining the whole seafood experience," Gruel said. "We really like how Laguna has a commitment to sustainability. Eating the right kind of fish and sustainability is how we operate, and we love how Laguna is really tuned into that."

Along with the upcoming opening, the company is holding a contest in which community members can submit their own recipe ideas. Slapfish will choose one, name it after the person and they will be able to eat that meal for free every time they visit.

"The recipe has to be sustainable," he said, "We have gotten over 100 submissions already, and we did the same thing when we opened the Huntington Beach location, and it was very successful."

Mayra Lucero, the human resources manager at Slapfish, and one of its first employees, is interviewing job candidates for the new location.

"It's funny because I don't like to put the name of the restaurant on the ads," Lucero said. "I like to hook them in before they know what it is."

She said she is proud of how much the company grown in such a short amount of time.

"When I first started I was promised all these things that are happening now," she said. "We expected it to take so long, and it didn't even take two years to get there."

She couldn't be more thrilled to have the next location in Laguna.

"It is a beautiful city, and I love going there," she said. "I think we will bring a lot of culture in the sense of sustainability. A lot of people in Huntington Beach weren't aware of it, and now they are more knowledgeable about the right kind of seafood you should be eating."

Michael Harris, a long-time customer and resident of Costa Mesa, is excited to see one of his favorite restaurants grow and bring people not only good food, but education in fish farming and overfishing.

"They educate but also put together a really good meal at a fair price," he said. "It's a classic fish shack."

Though the restaurant company is growing he does not see the quality in the food dropping one bit.

"They [Gruel and Naude] put a lot of work into quality control, making sure they can duplicate what they created at Huntington Beach," Harris said. "Simple recipes, well done with good quality ingredients that are well executed, not too much can go wrong there."

Lucero said that the expansion wouldn't have been possible without all the loyalty and support they have been given.

"I really want to thank all our loyal staff that has stayed with us, along with the customers," she said. "They are the reason we have been this successful."

Lucero said the clobster cake — crab and lobster mixed in a patty served with coleslaw and sauce — is her absolute favorite.

Gruel has a few recommendations of his own.