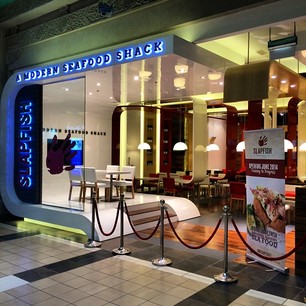 Andrew Gruel loved “everything about the ocean” when he was kid. A “fiend for fish,” the New Jersey native had grand plans of becoming a marine biologist.

But he ran into a roadblock.

“I was horrible at science,” he said with a laugh.

Instead of studying sea life, Gruel, 33, has mastered the art of selling seafood at affordable prices.

Most everything on the menu is less than $14 – from the quirky Clobster Cake (half lobster, half crab meat) to a seared fish plate. Now the Huntington Beach seafood shack, founded by Gruel and his business partner Jethro Naude, is taking its “boat to table” fast-casual concept overseas.

Slapfish is working with a local franchising firm to grow the brand to 500 restaurants over the next 10 years. The first franchises are expected to debut in the Middle East, where a well-established restaurant operator has bought the rights to open at least 50 Slapfish restaurants. The first one will debut in Dubai in early 2014.

A bulk of the expansion will occur across the nation, including Southern California.

“When you look at what Slapfish does, no one does it at that level nationally,” said Dan Rowe, chief executive of franchise development firm Fransmart.

“They have the same start-up costs as a Five Guys, but they're doing twice the sales volume,” Rowe said.

Slapfish's roots can be traced to Aquarium of the Pacific in Long Beach.

After spending his 20s cooking at restaurants around the country, Gruel needed a break.

At one restaurant back in New Jersey, he was pulling so many hours he had no time or energy to go home. Many nights were spent sleeping in a booth in the restaurant. During those times, he would tell himself: “If I ever work this hard again, I'm running my own business.”

In 2008, he landed a gig as director of the Long Beach aquarium's “Seafood for the Future” program. The position called for Gruel to spread the gospel of responsible seafood choices.

During that stint, he met Naude, an international seafood wholesaler.

The two hit it off, both having a passion for bringing high-quality seafood to the masses.

They culled their own money and launched a modern seafood shack on wheels in 2011. Like other food trucks, Slapfish was presenting a niche gourmet product at street-food prices. The caliber of fish Slapfish uses on lobster rolls, ceviche and grilled fish rivals ingredients found in fine-dining restaurants.

“Everyone was surprised how we were serving fresh seafood from a food truck,” Gruel said of the truck's early success.

Using Naude's connections, they created their own wholesale company to buy direct from trusted purveyors across the globe – South Africa, Baja California, Alaska and Oregon. By buying direct, Slapfish can offer lower prices because they've cut out “several middlemen” along the way, Gruel said.

But they don't buy from just anyone, as Slapfish's food philosophy is as modern as its menu.

Roughly 60 percent of its seafood supply is wild-caught fish, while the rest is farmed fish. No matter how that ratio fluctuates, Gruel says the menu will always be 100 percent sustainable.

“We know where it is coming from and if it's well-managed fish,” he said. “If the fish is wild, we want to know they're not depleting stocks.”

Gruel's menu includes daily specials, as well as signature fish dishes made with playful presentations. Slapfish's lobster dog is Gruel's interpretation of a seafood bratwurst dog. His crab cakes are a blend of lobster and crab meat.

“We take a classic American dish and reinvent it and make it our own,” Gruel said. “We want to be whimsical.”

Some menu items happen by mistake. During the OC Fair, the food truck was running out of chowder. Facing long lines, Gruel decided to conserve what he had by serving the classic chowder dish on top of french fries. The Chowder Fries are now one of the most popular items on the menu.