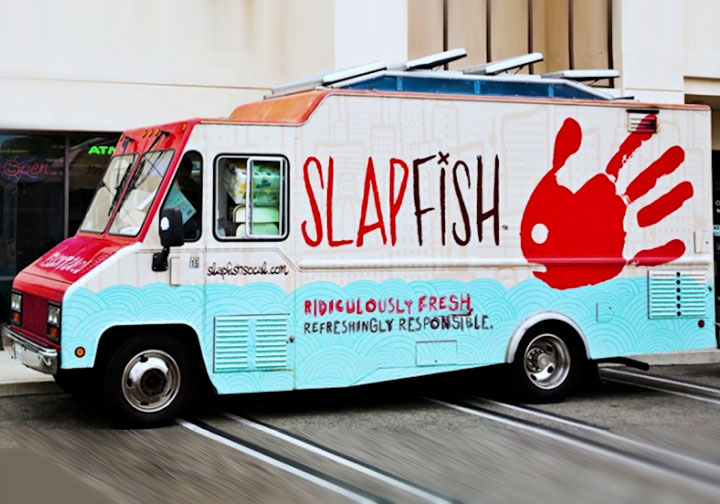 Have you had an oyster from Carlsbad Aquafarms yet? Grown not more than an hour's drive from OC, in the briny Pacific coastal waters of the town usually known for factory-outlet shopping and Legoland, these oysters can be found at the Orange Farmer's Market near Chapman University every Saturday, or offered by seafood purveyors and restaurants that know what's local is what's best. I had one last year at St. Roy in San Clemente, but it was only recently at the new Slapfish in Huntington Beach that I was able to sample in one sitting all three varieties the aquafarm produces.

The oysters are called a Luna when they're young; there's a pronounced brininess at the front and a boldly metallic, almost brassy finish at the end. The Blond, a more mature mollusk, is sweeter and slurps cleaner, less saltily. And then there's the Del Sol, for which they take the Blond for a two-hour immersion in fresh water to bring out the sweetness even more. Each is diminutive—the quivering, shimmering meat not bigger than a throat lozenge, cupped in a deeply welled ivory shell that's its own nature-formed spoon. You let one slide down your throat, and then close your eyes in ecstasy: The chemistry of its liquor and the electric presence of its flesh short-circuits the pleasure centers of your brain the split second the cold, sexy thing wiggles on your tongue. This, I thought, is as perfect a piece of seafood as I've ever had—better than the Olympia oysters I ate a few years ago in Seattle, and that's not just my local pride talking.

If Slapfish only served these oysters and nothing else, it would already justify the restaurant's existence. And co-owners Andrew Gruel and Jethro Naude know how special these babies are. Gruel—who was a program manager of the Aquarium of the Pacific's sustainable-seafood initiative—is an advocate who puts his product where his principles are. The sustainably produced Carlsbads have their own special blackboard, and Slapfish offers them with no adornment save for some slaw and a tequila-spiked cocktail sauce you hardly need. When you order a mix-and-match half-dozen, the paper baskets are marked to indicate which are which.

Everything is served in paper baskets, by the way. From the grilled-fish specials to the sandwiches, Slapfish dispenses with china and proper silverware. If you didn't already know, Gruel and Naude used to operate out of a food truck, and their old luxe lonchera habits die hard. The chowder fries are the same as the ones they made while on wheels, with perfectly good French fries and chowder dropped together into the same cup. It's a favorite of the food-truck faithful who used to have to eat standing on their feet. I'm a chowder purist, so I much prefer sipping the thick-as-cream soup by itself, with bacon crumbled on top and maybe a dash of Tabasco to cut through it every once in a while. Besides, there were fries aplenty in the fish and chips. Every crispy potato spear was better applied here to answer the giant beer-battered thing that's laid on top of it. I'm not exaggerating when I say the two hake fillets constitute about a pound—each enormous, flaky, moist slab covered in a batter exhibiting the porous nature of coral and a brittle crunch unmatched by anything terrestrial.

Barramundi—nicely grilled and resting on greens and a sauté of carefully trimmed asparagus, green beans, halved Brussels sprouts and tiny tomatoes—comes with a container of wasabi-dusted sticky rice, which is exactly the right thing to serve with it. And there's a nice version of shrimp scampi in an iron skillet, the shrimp seared to a golden shimmer and swimming in an almost-broth of butter, lemon and garlic, a hunk of toasted bread soaking it all up.

But if you ask Gruel what to order, he'll likely point you to a sandwich. He's in love with sandwiches, and a lot of what you'll eat will have bread, cheese or a tortilla. Be aware that the Tower of Wasabi Tuna is actually a slider, not a poke or a tartare. If you're going to have a sandwich, you might as well ask for the tuna melt or the lobster-shrimp grinder, which has the dressed seafood mix tucked into a proper hot dog-type bun in the style of a true Maine lobster roll.

The best thing about Slapfish is that, as with their former food-truck peers Jason Quinn and Roy Choi, Gruel and Naude are full of new ideas and still young enough to try them out and get away with it. They've named one of their sauces "awesome"—something that could be misconstrued as boastful if the sauce or the whole endeavor wasn't exactly that.